​The Champions League is a competition that is absolutely dripping with renown and prestige.

Whilst many people still champion domestic glory over European – a view that varies depending on your nationality, club’s history, and more often than not which competition your team happens to be doing better in at that particular time – for the bulk of European fans, the Champions League is the absolute pinnacle of club football. As befits a competition that is so coveted and possesses such a rich history, it has produced some utterly riveting finals. Narrowing this list down to just ten has been a tough old task, and there will undoubtedly be those amongst you who vehemently disagree with some of the inclusions, and are foaming at the mouth with some of the omissions.

To those people I say – unlucky. My list. My rules.

Also, it is important to note that this list is dealing explicitly with Champions League finals, not European Cup finals. I know this is robbing Nottingham Forest of their back to back heroics in the 1970s, and neglecting Romanian football’s crowning moment from 1986 – but it’s post 1993 only, sorry.

With Real Madrid finally about to relinquish their three-year hold on European football’s most prised asset, let’s take a look at the ten greatest finals that this magical tournament has ever produced. 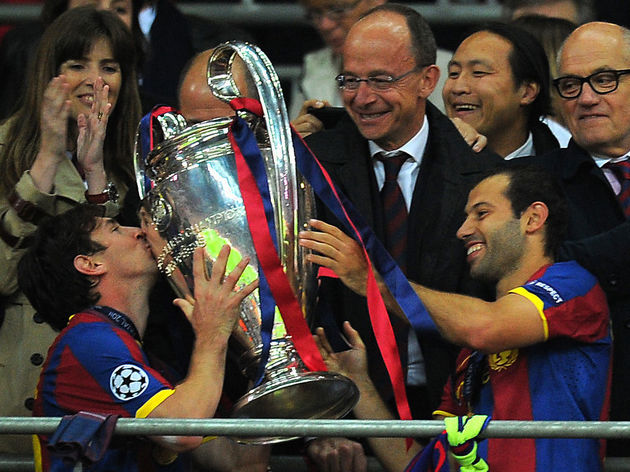 Barcelona to a 3-1 romp that in truth, could have been much worse. 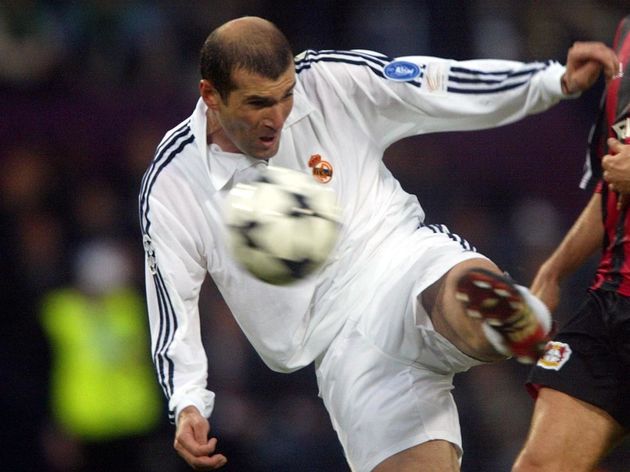 Some finals are remembered for dramatic comebacks, some are fondly recalled for the pitting of one truly great side against another, others are looked back on as being outright fantastic games of football.

However, some just come down to one incredible moment – one miraculous goal.

An innocuous pass played down the left flank. A hopeful cross looped up towards the penalty area. A mercurial Frenchman poised for what feels like an eternity. A left-footed volley timed to perfection. A helpless goalkeeper. A bulging net. The context and wider reaching implications of a Champions League victory are often more important than the match itself. This was certainly the case when Jose Mourinho’s Inter side overcame Bayern Munich at the Bernabeu.

The victory gave the Italian giants their first Champions League

The 1997 final told the classic story of the prevailing underdog, when Borussia Dortmund overcame a much fancied Juventus side at the home of their Bundesliga rivals, Bayern Munich.

The Old Lady entered the fixture with a domestic double already wrapped up and looking to defend their crown, having beaten Ajax in the final the previous year. Dortmund, by comparison, had failed to even top their group, and despite picking up an impressive win over Manchester United in the semi-final, few believed them capable of toppling a Zidane-inspired Juve.

However, Die Borussen shocked everyone with a 3-1 victory that saw them capture their first and only European Cup to date. Amongst the scorers was substitute Lars Ricken, the Dortmund native who scored with his first touch of the game after just 16 seconds on the Bavarian turf. Real Madrid’s recent Champions League exploits have been nothing short of sensational. Having claimed Europe’s top prize in four of the previous five tournaments, including consecutive victories in the last three; Los Blancos could have easily filled another couple of places on the list.

However, as impressive as the 4-1 annihilation of Juventus was in 2017, and as dramatic as the 93rd minute equaliser and subsequent extra time pummelling of intercity rivals Atletico Madrid was back in 2014 – last season’s 3-1 defeat of Jurgen Klopp’s Liverpool had absolutely everything.

There were two goalkeeping howlers by a devastated Loris Karius; an injury to Liverpool’s star man (Mohamed Salah, obviously); and Sergio Ramos as the maligned pantomime villain. Oh, and there was also an acrobatic Gareth Bale

Tottenham this Saturday it would go a long way to aiding their recovery.

The Reds can take heart from the fact that current goalkeeper Alisson has been in formidable form this season, and will be thinking that surely they can’t be unfortunate enough to fall victim to another outrageously improbable goal for the second final in two years. Can they? The story of this final was redemption. It’s as simple as that.

Bayern Munich were looking to clinch their first Champions League in over a decade, after falling short against Mourinho’s Inter two year’s before. Chelsea Premier League Who remembers Jose Mourinho without grey hair? The smiling, fresh faced manager basking in the glow of his first Champions League trophy cuts a disconcertingly different figure to the weary, cantankerous man we had grown accustomed to seeing towards the end of his Manchester United reign.

This final is not only significant because it marked the beginning of the ‘Special One’, and remains arguably Mourinho’s greatest managerial achievement on a long list of great achievements, but also because it is the only final to date that has been contested by two out-and-out underdogs.

Neither Monaco nor Porto entered the tournament expected to do any better than reaching a quarter-final, yet both sides defied the odds, picking up some big scalps on their way to the final in Germany.

Unfortunately for Monaco, despite besting Real Madrid and Chelsea on their remarkable run to the final, they were soundly beaten 3-0 by a Deco-inspired Porto in a game which kick started Mourinho’s sensational managerial career. With the 20 year reunion fixture taking place last Sunday, and Manchester United fans still in dewy-eyed, rapturous yet forlorn adoration about how well David Beckham can still kick a football – the scene of United’s greatest triumph seems an apt admission to this list.

The 1999 final is eerily similar to Inter’s triumph in 2010. In both examples, the eventual winners were seeking their first taste of glory since the 1960s, the victory resulted in an unprecedented treble, and Bayern Munich were the unfortunate casualties.

However, this final had added layers of drama that its 2010 counterpart cannot match. United entered the match without two of their key figures, with Paul Scholes and Roy Keane having picked up suspensions en route to the final; forcing the Red Devils to promote the less heralded Nicky Butt and Jesper Blomqvist to the starting lineup.

The weakened Red Devils seemed destined to fall just short as they entered injury time trailing by a goal. Two substitutes in the form of Teddy Sheringham and a certain current United manager clearly had other ideas however.

Sheringham struck first to seemingly take the game into extra time, before Ole Gunnar Solskjaer’s 93rd minute winner ensured that the trophy would be heading back to Manchester, and that the Norwegian striker would be heading into Old Trafford folklore. The men from Bavaria make their fourth appearance on the list, and their first on the winning side.

Wembley was once again the host stadium as Bayern and Dortmund went head to head in the first all-German final in Champions League or European Cup history. Die Roten arrived at London having already rested the Bundesliga back from Dortmund in impressive fashion, and with their eyes set on a treble.

Both sides had impressed en route to the final, with Jurgen Klopp’s Dortmund having managed to overcome Real Madrid on four different occasions across the group stage and the semi-finals, and Munich having ruthlessly dispatched Barcelona in their own semi-final.

Despite looking the more dangerous of the two sides, Dortmund went behind to a Mario Mandzukic strike, before Marco Reus earned his team a penalty to take things to 1-1.

In yet another final that yielded a late winner, Arjen Robben was the hero; his 89th minute goal enough to bring the trophy back to Bavaria, and eradicate all memories of his penalty miss in the previous year’s final. You knew it was coming.

As painful as it might be to listen to Liverpool fans bring up the ‘Miracle of Istanbul’ as often as possible, they do so with very good reason. Their miraculous comeback victory against AC Milan, is the single greatest Champions League Final of all time.

3-0 down at half time with a team featuring Djimi Traore and Milan Baros, up against a Milan side boasting the likes of Kaka, Paolo Maldini, Andrea Pirlo and Andriy Shevchenko to name but a few – the Reds’ talismanic captain almost single-handedly dragged his team back to 3-3.

Shevchenko would eventually miss the decisive penalty in the shootout, handing Liverpool the most dramatic and unlikely of victories.

This will not only be remembered as the greatest final of all time, but also as perhaps the greatest individual Champions League final performance of all time. Steven Gerrard’s second half performance was one of the most inspiring and stirring displays in European footballing history.