Carlo Ancelotti is number 13 in 90min’s Top 50 Great Managers of All Time series. Follow the rest of the series over the course of the next three weeks. You can find Andrew Headspeath’s career overview of Ancelotti he​re.

​If you are a footballer from the last twenty years and you are really quite good, chances are you’ve played for Carlo Ancelotti.

To underline the ridiculous amount of top talent that Uncle Carlo has worked with in his career, here’s a list of players that don’t make the final XI to come: Iker Casillas – Arguably the best goalkeeper of his generation, in a generation that has produced many greats, Casillas like Ancelotti is utterly addicted to winning. Though he lost his place as Real Madrid’s league keeper under the Italian, he was the first choice for the Champions League-winning Decima campaign in 2014 (his third European Cup). Though not officially retired despite a recent heart attack, Casillas is taking up a backroom role at Porto after an incredible 20 years at the pinnacle of football.

Cafu – One of Ancelotti’s key lieutenants at AC Milan, Il Pendolino (the Express Train) redefined the right back role for the modern era with his dynamism, delivery and ability to defend as well as attack. A Champions League winner in 2007, he retired from football a year later as Brazil’s most capped player (142), winning Serie A twice, the Copa America twice and the World Cup…twice. He is also the only player to have played in three World Cup finals. 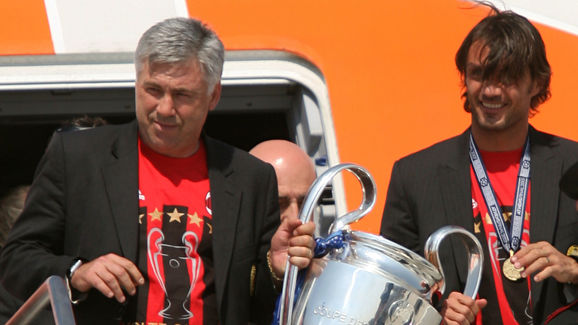 Paolo Maldini – Often cited as the greatest defender there ever was, Maldini was a one-club man, playing an incredible 902 times for I Rossoneri. In 25 seasons, he lifted seven Scudetti and five Champions League titles (two of which came under Ancelotti). His captaincy under Ancelotti was Maldini’s third period of sustained success at Milan, after first rising to prominence with Arrigo Sacchi’s ‘Immortals’ and later being a key part of Fabio Capello’s ‘Invincibles’ in the 1990s.

​Sergio Ramos – Ramos won the first of his four Champions League titles under Ancelotti as Real Madrid defeated rivals Atletico Madrid to claim La Decima in 2014. It was Ramos’ late header that forced the game into extra-time before Los Blancos ran out 4-1 winners. In 2019, the centre back

Alessandro Nesta – Another who has a pretty serious shout for the best of all time in his position, Nesta rose through the ranks at Lazio before earing a €30m move to AC Milan where he twice won the Champions League under Ancelotti. An immensely elegant yet tough defender, Nesta has a World Cup winner’s medal from 2006 but missed most of the tournament through injury. 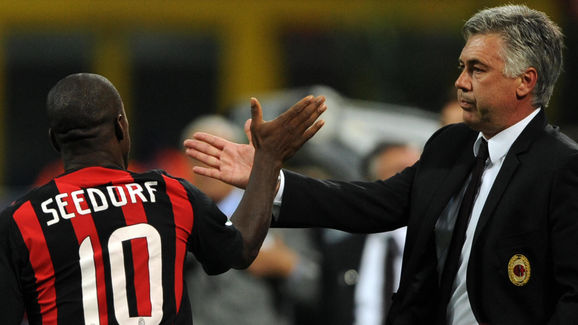 Andrea Pirlo – Like Cafu and Maldini, Pirlo’s influence on the game was so great that his interpretation of his deep-lying position is often just referred to as ‘the Pirlo role’ when other players attempt it. A wonderful passer and free-kick taker, Pirlo’s development was massively assisted by Ancelotti who quickly realised the young star’s strengths after moving from rivals Inter in 2001. A

Clarence Seedorf – The only player to have won the ​Champions League with three different clubs, the Dutch midfielder was, like many of his AC Milan teammates of the noughties, a world-class operator with incredible longevity. Starting his career in 1992 with Ajax, Seedorf finished it 21 years later with Botafogo in Brazil, having won league titles in three countries along the way.

Kaka – Prior to Luka Modric’s 2018 win, Kaka was the last man to lift the coveted Ballon d’Or (

Arjen Robben – The flying Dutchman’s €25m move from Real Madrid to Bayern Munich in 2009 remains one of elite football’s greatest ever bargains. After patchy success in England and Spain, Robben became a legend in Germany and cemented himself as one of the sport’s very finest – with his very own trademark goal. Though only managed relatively briefly by Ancelotti, Robben’s career success deserves recognition. With 12

​Cristiano Ronaldo – The five-time Ballon d’Or winner has been standing atop the peak of football for years before and since his involvement with Ancelotti. However,

Didier Drogba – Like Ronaldo, Drogba’s time under Ancelotti was relatively short but very sweet. The Chelsea legend enjoyed his best ever goalscoring season