Eden Hazard is number 16 in 90min’s Top 20 Greatest Footballers of the Decade series. Follow the rest of the series over the course of the next four weeks.

Not only was this ​tweet from Eden Hazard one of the most infamous grammatical errors of all time, but it set the stage for one of the most mesmeric footballing careers we have ever seen.

Yes, the Belgian propelled himself to superstardom during his time with Chelsea, but it was clear from a young age that Hazard was destined for greatness. Promoted to the senior side at Lille when he was still a teenager, Hazard

He picked up the Ligue 1 Young Player of the Year award in his debut season and retained it in the following campaign, and that form saw Zinedine Zidane confess to ​Marca in 2010 that he felt Hazard would be a perfect fit for ​Real Madrid – how’s that for foreshadowing?

Those two seasons were good, but it was the 2010/11 campaign which saw Hazard make the jump up to the next level.

The brilliant Belgian racked up 12 goals and 14 assists to fire Lille to an unlikely league and cup double, and Hazard, now 20 years old, was deservedly named as the Player of the Year. He was a superstar. 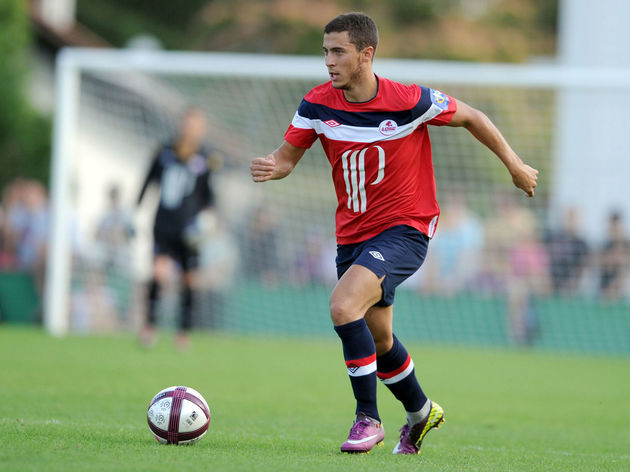 Hazard’s 2011/12 season was perhaps the finest to have ever been seen in France at the time and has since been compared to ​Kylian Mbappe’s meteoric rise in recent years. Hazard buried 22 goals and 18 assists, but it wasn’t enough to steer Lille to the title. It was clear he deserved a big move.

Fortunately for ​Chelsea, this all happened just as they lifted the ​Champions League for the first time in their history, and also whilst Chelsea legend Joe Cole was on loan at Lille from ​Liverpool. The stars had aligned, and one conversation with Cole and a poorly used apostrophe later, Hazard was on his way to Stamford Bridge.

£32m was a lot of money back in 2012, but it would go on to represent perhaps the greatest piece of business in Chelsea history. If fans were in any doubt about his pedigree, Hazard had won them over by the time his debut came to an end. His close control allowed him to turn a defender, before he slotted the ball through perfectly to Branislav Ivanovic to find the back of the net against ​Wigan Athletic.

It was 2-0 just minutes later, and Hazard was again the mastermind. His ludicrous agility and dribbling made two defenders look like fools, and they could do nothing but scythe him down in the penalty area.

Chelsea had found themselves a real star.

The 2013/14 campaign was when the ​Premier League really stood up and took notice of Hazard. Whilst his statistics may have dropped, his overall level of performance certainly did not.

Hazard did manage to pick up the senior award in the following season after firing Chelsea to their first league title since 2010, with the Belgian netting the all-important goal in a 1-0 win over ​Crystal Palace to secure the trophy.

Unfortunately, as we so often see from the Blues, they love to follow up glory with catastrophe. Hazard was one of many players to underwhelm in the 2015/16 campaign, but they bounced back in emphatic fashion. Like an unchained animal, Hazard ran riot on English football. Playing in the inside-forward role under new manager Antonio Conte, the Belgian was given all the creative freedom he could possibly desire, so it should come as no surprise that 16 goals and another Premier League title followed.

By this point, Hazard’s quality was indisputable. He had proven to be a magician with the ball, embarrassing defender after defender with his frightening ability to accelerate past players like they weren’t even there.

Unsurprisingly, his form had caught the eye of Real Madrid. Los Blancos, who were now managed by the same Zidane that had heaped praise on Hazard back in 2010, began flirting with the winger, and Hazard certainly flirted back.

Revealing his dream of working with Zidane and playing in Madrid, it seemed like Chelsea would one day be forced to part ways with Hazard.

The Blues did get a few more mesmeric seasons out of Hazard, who helped Chelsea to the Europa League title in his final year, before he began pushing for a move to Real.

With one year left on his contract, Chelsea had no leverage at all in the negotiations, yet still managed to negotiate a deal which will see them earn up to £150m. Blues fans have given club director Marina Granovskaia a lot of grief, but they couldn’t deny that she had outdone herself there.

Now finally with Real, it remains to be seen what Hazard can do with his time in Spain. He is living out a childhood dream and will certainly hope that playing in ​La Liga will help him finally pick up the Ballon d’Or which has eluded him throughout his career. Over the years, we have seen plenty of outstanding footballers, but rarely do we see talents like Hazard. Calling him world class almost doesn’t do him justice.

The kind of things he can do with a football are out of this world and, when his career eventually comes to a close, he deserves to be remembered as one of the best to ever lace up a pair of boots.

Number 18 – Sergio Aguero: The Man Who Painted Manchester Blue With One Kick of a Football​