Not only have Los Blancos lifted the trophy seven times, including a run of four in the space of five seasons from 2013/14 to 2017/18, they have never yet failed to reach the knockout stages.

But this season has got off to a disastrous start. Real could be looking at early elimination if things don’t improve and qualification hinges on a double fixture against Galatasaray.

The two results so far in 2019/20 are among the most embarrassing Real have experienced in the Champions League era. Here’s a closer at look those games and several others to rival them… This game was a repeat of the 1966 European Cup final, but by 2003 it was an enormous mis-match. Partizan had never previously qualified for the Champions League group stage and were only there because of a shock qualifying win against a very good Newcastle.

Real, on the other hand, were at the peak of the original ‘Galacticos’, with Zinedine Zidane, Luis Figo, Ronaldo, David Beckham, Raul, Roberto Carlos and Iker Casillas all starting the clash in Belgrade. But none of the superstar names could inspire a victory and it ended goal-less. Real had beaten Bayer Leverkusen in the 2002 final when Zidane scored an iconic volley in Glasgow. But it must be said that the German club were a shadow of that side just two years later when they met Los Blancos in the 2004/05 group stage.

It was again a full strength side that featured all of the ‘Galacticos’, but three quick-fire Leverkusen goals either side of half-time – the third from an emerging Dimitar Berbatov – left Real reeling. A year after opening the 2004/05 campaign with a pummelling at the hands of Bayer Leverkusen, Real were comfortably thrashed on matchday one again. This time, by French champions Lyon, who were starting to emerge as a European force.

Defeat alone might not have been so jarring, but Real were 3-0 down at Stade Gerland inside just 31 minutes after John Carew, Juninho Pernambucano and Sylvain Wiltord scored. Lyon went on to take near maximum points from the group, while Real limped through with 10. 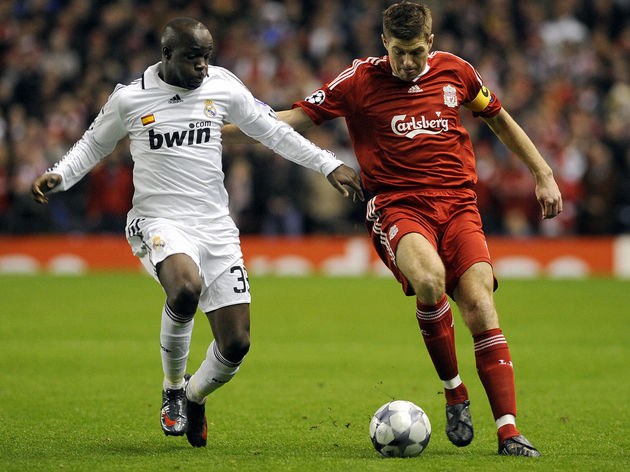 Real Madrid never expect to lose, let alone be on the receiving end of a genuine thrashing in the knockout stages of the Champions League. Therefore, it did nothing to spare blushes that Liverpool were fighting for the Premier League title when they beat Los Blancos 4-0 in 2009.

Liverpool had already snatched a narrow away win in the first leg of the last 16 tie in Madrid, but two goals in either half of the second leg at Anfield gave a rampant Reds side a 4-0 victory on the night and an even more comprehensive 5-0 aggregate win. By 2013, Real had been chasing La Decima for 11 long years and were in the Champions League semi-finals for the third season in a row. To then be so close to the final again and lose a first leg in such heavy fashion that it rendered the second leg almost pointless was a real shock.

This was a Jose Mourinho team, but it allowed Robert Lewandowski to run riot for Dortmund. The Pole scored four times, with three of the goals coming in the space of just 16 second-half minutes. It meant Dortmund could lose the second leg 2-0 and still prevail. Real’s Champions League dominance, winning four titles in five seasons from 2013/14 to 2017/18, ensured that embarrassing results were off the table for a while. But a humbling 3-0 home defeat to CSKA Moscow was a reminder Los Blancos are still fallible in Europe.

Real had actually already narrowly lost against the Russians away from home on matchday two. Yet even under the ill-fated Julen Lopetegui, the 13-time champions recovered suitably to qualify, only to then end the group stage with their biggest ever European home defeat. Having been beaten by CSKA Moscow in December 2018, Real were then humiliated in their very next Champions League home game when Ajax visited the Bernabeu three months later and ran riot in the Spanish capital, winning 4-1 and knocking out the holders.

Real actually won the first leg in Amsterdam and were therefore favourites to progress to the quarter-finals. Yet Ajax were the better team in every way and had opened up a 3-0 lead after 62 minutes, overturning the aggregate deficit. That eventually became 4-1.

The match also became infamous for Sergio Ramos filming for his Amazon Prime documentary from the stands, having been deliberately suspended in the first leg. If there were doubts about Real ahead of the 2019/20 Champions League season, crumbling to a 3-0 defeat against Paris Saint-Germain was not the way to dispel them. It was a full debut to forget for €100m summer signing Eden Hazard and pressure piled on coach Zinedine Zidane.

PSG were without their established front three of Neymar, Kylian Mbappe and Edinson Cavani, but Angel Di Maria came back to haunt his former club, scoring twice in the first half at Parc des Princes. Real failed to even muster a single shot on target in 90 minutes. Including the result against Ajax, Real were on course to lose a third successive Champions League game until a late Casemiro equaliser rescued a point at home against Club Brugge. Los Blancos had been 2-0 down at half-time after two goals from Brugge forward Emmanuel Dennis – ​who celebrated in Cristiano Ronaldo fashion.

Real goalkeeper Thibaut Courtois was substituted at half-time after complaining of dizziness and feeling sick. VAR later came to their aid after Sergio Ramos’ header was initially ruled out for offside, while Brugge were reduced to 10 players when Real were still trailing 2-1.