Paris Saint-Germain star Thomas Meunier has revealed his ‘sadness’ at injuring Eden Hazard in his side’s 2-2 draw with Real Madrid on Tuesday night, suggesting his Belgium teammate is the one player who he really wouldn’t want to hurt.

Hazard was forced off midway through the second half with what appeared to be an ankle injury, after a collision with Meunier.

Reports suggest that ​the attacker will only be out for around 10 days, potentially sidelining him for ​Madrid’s La Liga clashes with Alaves and Espanyol but no more, as the first Clásico of the season approaches on 18 December. 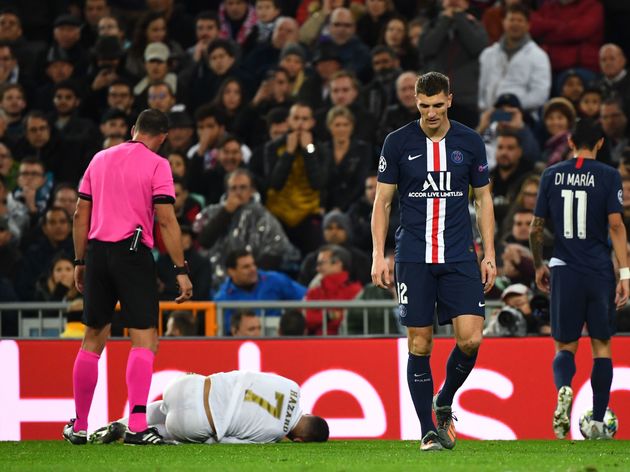 He is quoted as saying post-match: “I am honestly sad. I tried to contact him directly after the match, but I couldn’t reach him.

“Aside from that, I saw two or three of his teammates who said that he had taken quite a hit. I cross my fingers that it is not too bad. If there is one player who I really don’t want to injure, it’s Eden.”

The draw at Santiago Bernabeu confirmed PSG will qualify to the last 16 of the Champions League as Group A winners, while Real Madrid go through as runners up. Karim Benzema scored the opened on the night after 17 minutes, and looked to have sealed the victory when he doubled his tally with ten minutes left to play.

However, the Ligue 1 Champions came storming back to snatch a point, through goals from Kylian Mbappé and Spanish midfielder Pablo Sarabia.

The result raises further questions about the future of manager Zinedine Zidane, who has come under increased pressure in recent weeks after an indifferent start to the season.