A disappointing Clasico ended goalless at Camp Nou on Wednesday night, keeping Barcelona at the top of La Liga despite Real Madrid producing an accomplished and disciplined performance.

Both sides went close inside the opening 30 minutes, with Karim Benzema having a shot cleared off of the line by Gerard Pique before Sergio Ramos performed a similar action to deny Lionel Messi.

The draw means Barça keep top spot ahead of the weekend, though both sides will know further slip-ups must not occur in what is set to be one of Europe’s more exciting title races in the second half of the season. The pressure piling on Ernesto Valverde had been alleviated somewhat by a run of four La Liga victories in a row, but the draw with Real Sociedad on Saturday left Barça needing to beat Real to give themselves a more comfortable cushion at the top of Spain’s top flight.

But for the most part Barça failed to get their most influential players involved in their attacking build-up. While Messi was bright throughout, neither Luis Suarez nor Antoine Griezmann could get themselves in situations that really threatened Real. That’ll be concerning for Valverde, even if his side have scored ten more goals than Real in the league this season.

STAR PLAYER – Gerard Pique has reestablished himself as one of the world’s best centre backs after a few ropey seasons, and it was another accomplished performance from the former Spain international on Wednesday night. His goal-line clearance early on demonstrated immense positional awareness, and he was able to ensure spells of Real pressure always ended without any firm final product.

1.Alba a left back, has carried more threat in attack than Suarez who is a striker

2. Our midfield is getting tossed around by Fede Valverde and Kroos

3. I miss Xavi and Iniesta

4. Pique is our best defender by far and still one of the best in Europe

5. Messi has been great

Messi, Pique & Ter Stergen are the inky Barca players on the pitch tonight.

Pique just beat Benz in a sprint. Now I turn my computer off ✌

An inauspicious start to the season seemingly ruled Real out of having a credible shot at the La Liga title, but slip-ups from other teams and a good run of form that has seen Los Blancos lose just once since October saw Real come into Wednesday night’s clash level on points with their hosts. 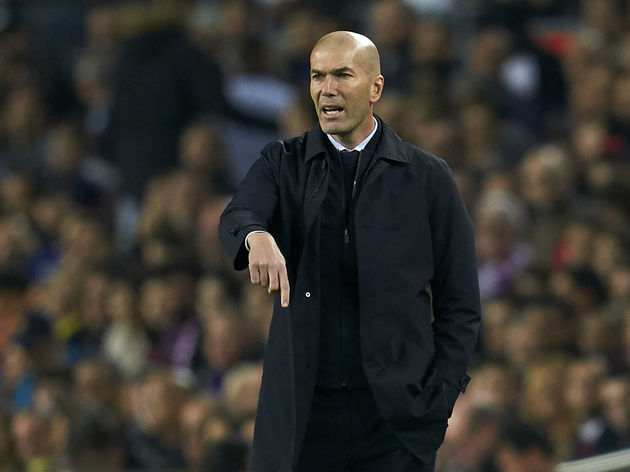 Real effectively limited Barça’s attacking output and had more than their fair share of chances, with Gareth Bale hitting the side-netting when well placed to test Thibaut Courtois in the second half, while Benzema hit the woodwork in the 64th minute. The Uruguayan has been one of Los Blancos’ standout performers so far this season in the semi-regular absence of Luka Modric, who has struggled with injury throughout the campaign and was stuck on the bench on Wednesday by Zidane.

His battle with Barcelona’s shiny, ex-Ajax midfielder Frenkie de Jong was one of the more intriguing battles of the evening, and it was one Valverde won for the most part, limiting the Dutchman’s forward forays to give the visitors more of a platform in midfield.

Fede Valverde outperformed Frenkie de Jong in the first half.

Federico Valverde will become one of the greatest midfielders ever if he keeps going like that. He is just getting better and better.

Casemiro was also instrumental in ensuring Barça were rarely able to build up too much momentum in their attacking movements during the first hour of the contest.

The two teams will play their last matches before the winter break at the weekend, with ​Barcelona hosting Alaves on Saturday before ​Real Madrid entertain Athletic Club on Sunday,