Eden Hazard is ranked 22nd in 90min’s European Player of the Year series.

It has been a momentous year in the career of Eden Hazard.

Having almost single-handedly hauled an underwhelming Chelsea side to a third-place finish in the Premier League, the Belgium international added a Europa League crown (they give crowns to the winners of the Europa League, right?) to his trophy cabinet before finally sealing his dream move to Real Madrid after seven years in west London.

While injuries have meant his start to life in the Spanish capital has been stuttering, the Blues and the Premier League’s loss is undoubtedly ​Los Blancos and La Liga’s long-term gain. Hazard illuminated the English football throughout his time here, demonstrating extraordinary technique in his dribbling, footwork and vision – a true joy to behold. Following the conclusion of the 2018 World Cup, the Belgian captain gambled his Spanish dream by staying with Chelsea when a move seemed inevitable. What if his form dropped?

No chance. Hazard delivered his most productive season at Stamford Bridge, notching 21 goals and providing 17 more in all competitions. With a haul of six trophies in seven years come June, his loyalty was finally rewarded with the transfer of a lifetime. Sure, yes, right – this was some *extremely* Sunday league defending from the Hammers, but it was also a goal that encompassed everything that Eden Hazard is about.

Picking up the ball midway inside the opposition half, Hazard drove at the ​West Ham defence, drifting past Mark Noble as though he wasn’t even there before producing a masterful croqueta to allow him to squeeze between the centre-backs and sweep past Lukasz Fabianski. The very best players can only be labelled as such when they step up on the big occasion.

In the balmy heat of Baku in the Europa League final in late May, in what would ultimately prove to be his final appearance for ​Chelsea, that is exactly what Hazard did.

In a majestic display, the 28-year-old terrorised the Arsenal defence all evening, laying on a second-half strike for Pedro before scoring two on his own in his farewell performance. Not a bad way to bow out. 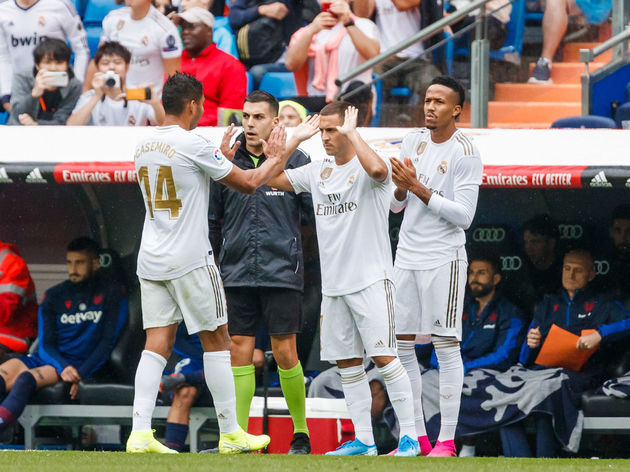 However, a hamstring injury meant Hazard would have to wait more than two months to make his competitive debut for Los Blancos.

He finally made his bow in a half-hour cameo at home to Levante in La Liga as Real ran out 3-2 winners.

It would be another three weeks before Hazard got his first goal for the club, as Real’s new no.7 asserted himself in a 4-2 victory over Granada in Madrid. Hazard picked up innumerable man of the match awards during his time in the Premier League, to the extent that it was a surprise when his name wasn’t called at the end of the 90 minutes.

However, the Madridistas would have to wait until November to witness the kind of performance the Stamford Bridge faithful had been accustomed to.

On a dank night in Eibar, Hazard was at his imperious best once again. Rather than taking on the responsibility for the whole team as he so often did in west London, the attacker returned to basics, running at the defence and causing problems throughout with his quickness of thought.

His club’s supporters will hope there is more of the same to come when he returns from injury in the New Year.