​Eden Hazard is unquestionably one of the best players in the world, and luckily for those of us who love English football, the Belgian wizard was able to grace the Premier League with his brilliance in his prime.

Today the Real Madrid winger turns 29, and the birthday boy has had a seriously fantastic and decorated career so far.

After starting his career at Lille, he moved to Chelsea before signing for Madrid last summer.

Here’s a look back at his finest career moments. Before their title win in 2011, Lille had failed to win Ligue 1 since 1954. However, ​Eden Hazard was the man to finally end their 57-year wait.

Lille would go on to win their third top-flight title by eight points and the Belgian was crucial to their victory. Just 20 years old, Hazard performed magnificently in a front line alongside Moussa Sow and Gervinho, as he went on to win the Ligue 1 Player of the Year – the youngest player to ever do so.

Everyone knew that this kid was something special. After spending one season adapting to the ​Premier League, Hazard began to showcase his incredible ability on a regular basis in his second term, and was awarded with the PFA Young Player of the Year award during the 2013/14 season for his efforts.

The flying winger had a stunning season, which included his first-ever Premier League hat-trick which came against Newcastle. He also had scored a brace in a thrilling 4-3 away victory at Sunderland, a performance which ​Chelsea manager at the time Jose Mourinho described as Hazard’s best performance of the season. A truly outstanding season, the 2014/15 campaign marked the first time that people began to realise that Hazard was right up there with the world’s very best players.

During 2014/15, Chelsea went on to win their first Premier League title since 2010, which was inspired by a truly remarkable individual season from their main man.

Hazard produced stunning figures of 14 goals and 10 assists from the left and his guile and creativity were pivotal in guiding the Blues to the Premier League.

His performances were also rewarded by an individual accolade, as he won the PFA Player of the Year award, topping off a fantastic season.

​That Goal Against Tottenham

The game was dubbed ‘the Battle of the Bridge’ due to the fiery nature and antics that were on show during the game, but Hazard was the man who stole the show. Spurs led 2-0 knowing that they had to win to keep the pressure on Leicester City at the top, but goals from Gary Cahill and an absolute stunner from Hazard stopped them from going any further.

It was one of the great nights in Premier League history and Hazard was the man to take all the headlines once more. After a poor and highly controversial season under Mourinho, Antonio Conte took hold of the wheel and steered Chelsea and Hazard to yet another Premier League title. Hazard was the main man once more in the side, and produced a mesmeric 2016/17 campaign.

The brilliant Belgian racked up 16 goals in the league that season, and none were better than his jaw-dropping solo strike against ​Arsenal. Hazard received the ball in midfield and drove at the Arsenal defence – leaving Francis Coquelin spinning and falling to the ground. He continued his run as he danced past Laurent Koscielny. He then coolly slotted home past Petr Cech, as he scored one of the goals of the season.

N’Golo Kante would go on to win the PFA Player of the Year award for his incredible performances in midfield, but really it was Eden Hazard who was the best player in the league that year.

That Goal Against Liverpool 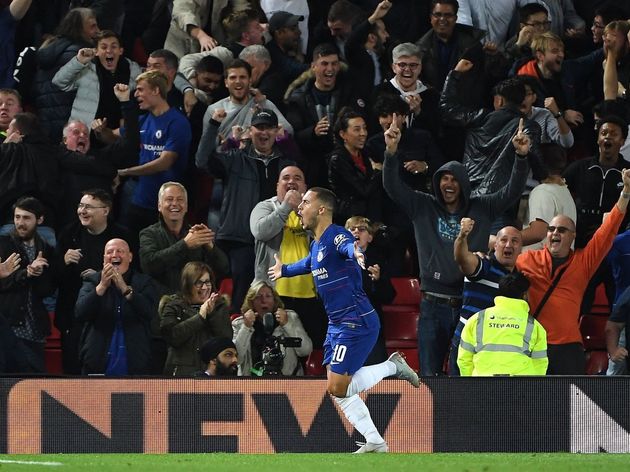 We know that ​Liverpool don’t lose at home. They very rarely drop points at home. However, the last time they did lose at Anfield was against Chelsea in 2018/19.

Yes, it was just a League Cup game and both teams had played slightly weaker sides, but what Eden Hazard did to win the game and steal the show was truly breathtaking. The score was 1-1 and he had just come off the bench to try and win the game. Boy, did he do just that.

Hazard received the ball on the right flank, and he decided to run at Naby Keita. He beat the Liverpool midfielder comfortably, then proceeded to absolutely rinse Alberto Moreno and find space for a shot. The 29-year-old made the finish look easy, as he thumped the ball home.

Another special moment from a special player.

Winning the Europa League in His Final Game for Chelsea Prior to the 2018/19 Europa League final, it was pretty common knowledge that Hazard was set to head to Real Madrid. However, he was desperate to win a European trophy before he left for Spain, and Arsenal were the side who stood in his way.

At the end of the day, it was no contest. The Blues thumped the Gunners 4-1, with Hazard bagging a brace and putting in a man of the match performance. It what was yet another brilliant Eden Hazard display, and it was the perfect way for the Belgian to say goodbye to Chelsea.