​As the Real Madrid players walked off the pitch after a 4-1 away win at CA Osasuna, it was very obvious as to who had run the show.

The Spain international was absolutely phenomenal for Madrid, orchestrating the game in the number 10 role and also grabbing himself a goal.

​​The silky Spaniard bore the brunt lot of criticism at the start of the season, and was regularly scapegoated by Madrid fans – especially following a defeat at the hands of RCD Mallorca back in October.

However, his performance on Sunday showcases just how good ​Isco can be, and should he continue playing like this, he could make this season a sensational one for Los Blancos.

Now let’s rewind back to Madrid’s Champions League final win over Juventus in 2017. The 27-year-old was simply mesmeric, running and dominating the game as they won the game 4-1. ​Cristiano Ronaldo bagged a brace, but Isco was the star of the show. Isco’s best performances this season have come in the big games. At home to PSG, away to Barcelona and against Valencia in the Supercup semi-final. When ​Madrid really need him, he more often than not shows up.

There is still a hint of inconsistency in his game, especially in the smaller fixtures. However, that is easily sorted, and should he continue performing in the big games, then who really cares?

But how has this transformation happened? What has changed from the start of the season to around January for Isco to find some of his best form? Isco’s best form for Madrid came during Zinedine Zidane’s first spell at the club, where they won three Champions Leagues in a row. The Frenchman is a huge fan of the playmaker, and his system was perfect for him.

They played a diamond formation with Isco in the number 10 role behind Ronaldo and ​Karim Benzema, and it worked like a charm.

Madrid started this season in a 4-3-3, with Isco either occupying the bench or playing in an unfamiliar wing role. His performances were poor, and as expected, Twitter ‘fans’ swarmed to criticise him and demand that he be sold. But in recent months, Zidane has returned to his favoured diamond formation, with Isco playing in the hole behind the striker.

His improved form has coincided with the switch in formation, and he is slowly returning to his best.

On his day, he is arguably the best playmaker in the world. His dribbling ability is second to none, and he can create a bit of magic out of absolutely nothing.

But as previously mentioned, he may need to add a little bit more consistency to his game. Even his manager agrees. Speaking after the game, Zidane said:

“He had a brilliant game like everyone else, but above all I am happy about his goal, because he needs to score more goals.”

He’s right. Isco is an unbelievable player, and should be scoring more goals.

Regardless, Madrid fans and Zidane will be delighted with his performances and improved form. He is a wonderful playmaker and potentially the man to make the difference in the big games. 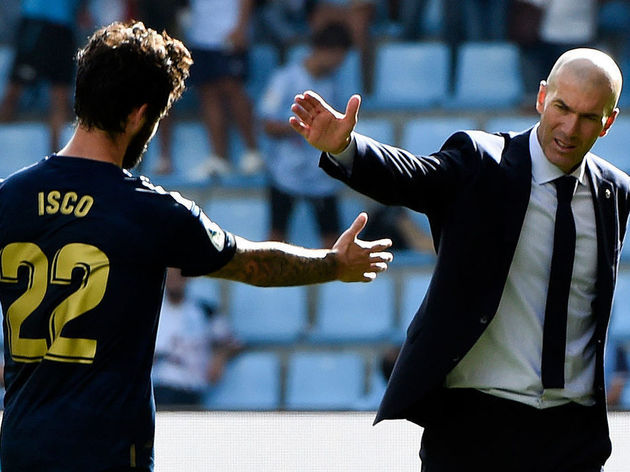 With Madrid competing in the Champions League and ​La Liga, they will be looking to their stars to step and and push them across the line on both fronts. Isco could be just that man, and there is no doubt that he is has all the quality to do so.